Get discovered by employers. Create your
job seeker profile and resume today!

The Best Jobs In Construction 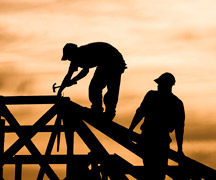 The economic recession wasn't felt harder by any U.S. industry more than construction, where employment peaked in 2006 and plateaued in 2007, then bottomed out in 2011. Happily, gradual improvement throughout 2012 and into 2013 offers construction job seekers some relief.

Residential and commercial construction are both improved over the past year with indicators pointing to continued growth. Building permits for residential housing in May exceeded the previous year’s estimates by more than 20%.

In fact, there might be more jobs available than there are applicants to fill them, says Julian Anderson, president of Rider Levett Bucknall’s North American division in Phoenix.

“So many left the industry during the recession, which generally leads to shortages in manpower, particularly in skilled young people,” he says.

Unemployment in construction outpaced the national average in recent years, peaking near 12% in 2011. To address the labor gap and recruit prospective candidates, Anderson says wages are on the rise.

Newly created jobs in the construction industry provide opportunities for candidates with a diverse range of qualifications and skill sets. A construction manager/site superintendent is one such career, and one of the most lucrative in the sector. The U.S. Bureau of Labor Statistics (BLS) estimates the median annual salary at $82,790.

Tom Taylor of Mart Inc. General Contractors in Irving, Texas, says that the construction manager/site superintendent is a critical position to his company’s mission. “These are the people clients see and interact with on a daily basis. It doesn’t matter how much you know about construction if you rub people the wrong way,” Taylor says.

Technical know-how is obviously crucial for this position, but Taylor said an absolutely essential skill is working well with clients – particularly for an organization like Mart, which he says thrives on developing long-term rapport with customers.

The construction manager/site superintendent oversees the day-to-day operations on-site, which is also important to the overall profitability of a project. Taylor says that during the recession, profit margins were thin. Particularly skilled construction managers/site superintendents need to make sure projects “avoid hiccups” to prevent further cuts into those margins.

“We put a superintendent on every job full-time,” Taylor says. Another vital position, Taylor says, is project manager. Mart has increased its staffing of project managers recently, and will to continue to add more as it takes on more projects.

“One project manager can handle about three projects, max,” he says. In recent years, freelancing skill-trade professionals have found the most opportunities. Construction workers with specialized trade skills have been the most in-demand amid the industry’s tumultuous times, Department of Labor statistics show.

BLS projections suggest most specialty trade careers will grow over the national average in the next 7 to 10 years. That means 20% to 25% more opportunities for carpenters, electricians and plumbers.

Contributing to the growth of these fields are the options they offer. Some skilled workers are independent contractors with whom construction companies employ on an individual basis. Other companies choose to staff their own, full-time skilled trade workers.

Taylor emphasizes the value an employee with these specialty skills has to a construction company.

“We have one young man who can paint, do drywall and texturing, pour concrete and if it’s simple, do some plumbing. I wish I could clone him,” he says. “We’d love to have five or six" similar workers with more than one skill.

Not all construction jobs entail long hours on the site. Drafters, for example, conceptualize projects in an office environment. While they may not handle a hammer, their contributions are equally important to the finished product.

Anderson says emphasizing the diverse range of careers the construction industry offers to college students and other job seekers is important for the sector’s long-term growth.

“General perception is that you can make more money in financial industries, more easily than working in construction,” he says. “But [construction] is not just being a laborer, a carpenter or a tradesperson.”

Some advice Anderson has for those entering into the sector is to consider international opportunities. He says spending a year or two abroad gives workers “a different perspective,” which stands out both on a resume and in interviews.

Anderson says that Australia, China and New Zealand are three nations where construction industries have remained strong during global economic turbulence. He also stresses four core values that are important for construction workers to seek: knowledge, a personable attitude, availability and a balanced demeanor to react to demanding situations with level headedness.

Below are CareerCast.com’s best construction jobs for 2013: Architects handle the initial phases of structural construction projects, including conceptualization and design.

T&D World Job Center is dedicated to bringing together the Electrical job openings of the nation and the candidates specifically looking for them.  The entire focus is on Electrical jobs in the construction and energy industries; this means jobs posted on this site will only attract the most relevant candidates.

We are more than just a job board. Since 2000 we've made it our business to empower customers with the most affordable and efficient recruiting tools of the highest quality available in the construction industry. Our platform offers a database of job postings, predominantly from direct employers, as well as an active resume database full of job seekers ready for hire. We are excited about the opportunity to serve you. Begin the process today! Meet our team below.

Thousands of jobs from a variety of niches.

The Best Jobs and How to Get Them

The cutting-edge book that finds you the best jobs & highest incomes.